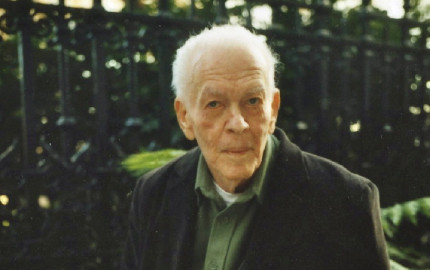 Statement from the Albert Einstein Institution on the death of our founder Dr. Gene Sharp

The Albert Einstein Institution is greatly saddened to announce the passing of our founder, mentor, and friend Dr. Gene Sharp, who passed away peacefully on January 28, 2018, at his home in East Boston. He had recently celebrated his 90th birthday.
Widely recognized by scholars, practitioners, organizers, and activists worldwide as the greatest theoretician of nonviolent action since Mohandas K. Gandhi, Sharp founded the field of academic research on the theory and strategic practice of nonviolent action.

A four-time Nobel Peace Prize nominee and the winner of the 2012 Right Livelihood Award, Sharp devoted his life to studying nonviolent struggle, deeply researching and documenting its use in human history, analyzing how the technique operates cross-culturally, and sharing the results of his research with other scholars, practitioners, organizers, government institutions, and citizens and civil-society groups on every continent. His numerous books and articles on the subject have been translated into more than 50 languages, and are disseminated worldwide.

His work continues to inspire and enable people engaged in struggle to wield social power by building on and learning from the experience, results, bravery, and sacrifice of those who have come before them.
Sharp is survived by a brother, nieces, nephews, and cousins, and by a large national and international family of friends and colleagues. His legacy lives on in the Albert Einstein Institution, which he founded in 1983 to advance the study and use of strategic nonviolent action as a pragmatic alternative to violence in acute conflict. He refused to retire and worked up until his death.

A rare collection of orchids on the top floor of his home were his joy and respite, along with his dogs and exploring the wild spaces of Mexico, Norway, and Canada.
He is loved and was loved, and leaves behind generations of students and adherents of his work all over the world, who are as a result of his findings better able to win political freedom and resist oppression. He has set down his pen for the last time; yet his work will live on forever.

Memorial donations in Gene Sharp’s name may be made to the Albert Einstein Institution, https://www.aeinstein.org .

A memorial service to celebrate Gene Sharp’s life and work will be held later this spring.

Send us a message

If you would like to contact us about NVR Action and Practice, please use the contact form opposite and we will get in touch with you as soon as possible.

Our email address is: heismanne@gmail.com